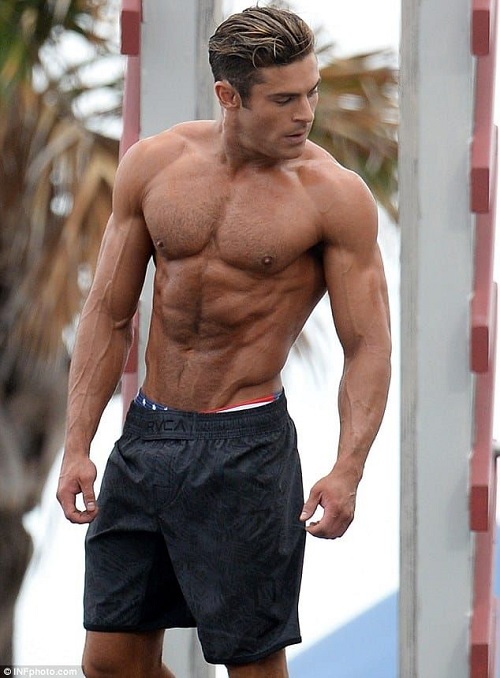 Zac never addressed these comments and, to this day, a lot of people still wonder how he actually transformed his physique.

Did he do it naturally or did he get some help from steroids?

If you’re one of those people that wants to know how he did it, you'll definitely won't want to skip this article.

The first thing that people need to realize is that while Zac has a muscular physique, he isn’t a very big guy, genetically.

What do I mean by this? Take for example someone like The Rock or Chris Hemsworth.

They genetically have large, tall frames that can accommodate a lot of muscle mass.

Zac, on the other hand, doesn’t have a big frame or is very tall. 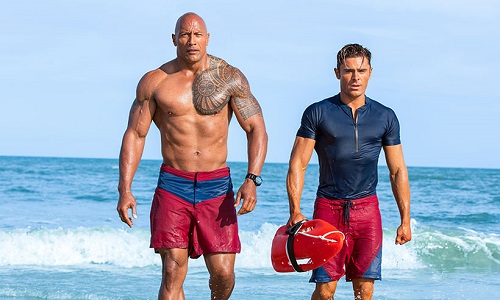 What Zac does have is incredible muscle shape and insertions – which make him look a lot bigger than he actually is.

I did some research and couldn’t manage to find much information on his physique’s measurements.

What I did find is a website with some basic stats. Sadly, it doesn’t state any sources.

Although these stats come from a non-reputable website, they honestly aren’t too far-fetched from the numbers I had in mind.

Honestly, the only thing I would second-guess would be his waist measurement.

Although 32 inches is not big at all, I’m inclined to believe that it’s even smaller than that.

The crazy thing about Zac Efron is that he wasn't always known for his physique.

During his Disney days, Zac wasn't really that muscular; on the contrary, he was very skinny.

This is not to say that he wasn't in shape though, because he always had visible abs and some type of definition. 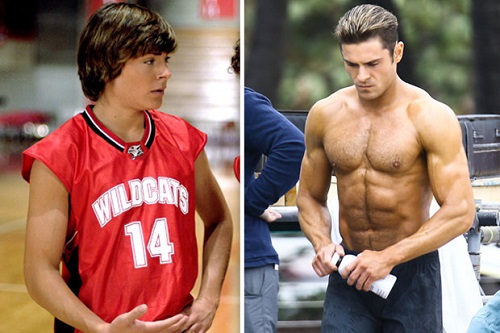 It wasn't until he joined the Baywatch cast that he underwent the crazy physical transformation that people still keep talking about.

So, what exactly did Zac Efron do to transform his physique from skinny to jacked?

I have an idea of how he did it, but first, let's take a look at what Zac and his trainer have to say about it.

As most fitness fanatics probably already know, diet is -arguably- the most important part of building an impressive physique.

All the training in the world won't amount to much, if you aren't following a strict, intelligent diet.

In order to get ready for Baywatch, Zac had to really suffer and make a lot sacrifices in the kitchen.

According to Patrick Murphy -Zac's trainer- the first thing the young actor had to do was get rid of all refined foods.

This meant that for twelve weeks, the Baywatch star would limit his food choices to whole foods that were both natural and packed with nutritional content.

His diet was being consistently monitored and changed, according to how his physique was looking. 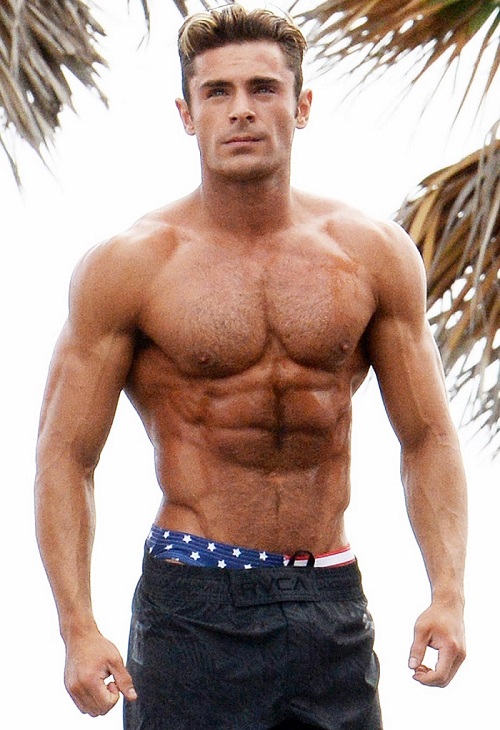 His nutritional protocol was so intense that methods such as intermittent fasting and carb loading were used to accelerate his progress.

At one point, Zac underwent a zero-carb and zero-sugar diet for nine whole days!

The diet wasn't all suffering though, because he was allowed to have a few cheat meals here and there.

After the nine days of suffering were over, Zac moved on to have a cheat meal that would probably make his co-star, The Rock, jealous. 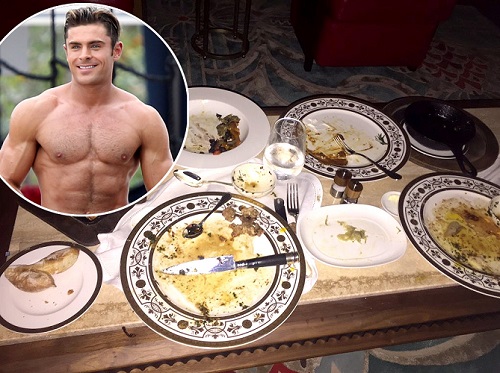 Absolutely insane and definitely worth the wait, if you ask me!

With that being said, it's important to remember that cheat meals are actually a dieting tool that are extremely effective.

Overall, when Zac wasn't chowing down countless amounts of food, here's what he was eating on a daily basis.

A lot of people already know this, but protein is one of the most important building blocks of muscle.

In order to get shredded while gaining muscle, Zac had to consume a lot of it.

Contrary to popular belief, fats aren't solely responsible for making people gain weight – that honor has to go to carbs.

Why? Because carbs are everywhere and they are rather easy to overeat; something that doesn't happen entirely with fats.

This means that cutting carbs will lead to accelerated weight loss, right?

Carbohydrates are an essential part of building muscle.

Without carbs, your body won't have the necessary nutrients or energy to perform in the gym.

Balancing them out is extremely important and will lead to consistent weight loss and muscle building – Zac Efron managed to do just that.

Let's take a look at his favorite carb sources.

Healthy fats -from whole foods- are very important; they contribute to building muscle as well as keeping a healthy hormonal balance.

Overdoing them can definitely lead to gaining weight, but if kept in check, they can actually do the opposite.

Here are the fat sources Zac relied on, when getting ready for Baywatch:

Now that we know what Zac Efron did in the kitchen to get lean and muscular, let's take a peek at what his training program looked like.

The first thing I want to mention is that, according to Muscle and Fitness, his workouts were continuously evolving.

I also read somewhere that every single workout -leading up to the filming of the movie- was unique.

This meant that he never performed the same workout twice.

Throughout the twelve-week period, Zac followed a three-day split, with one rest day.

After the split was completed, he would repeat it.

Day 1: Back and Biceps

Since time was of the essence, every single one of Zac's workouts was based on super sets.

This meant that he was combining two exercises -doing them back to back- and only resting for a brief period of time.

The bodybuilding training style – used by Mr. Olympia Arnold Schwarzenegger- would allow him to keep his workouts short & intense.

He would also burn a lot of calories and maintain an intense pump, throughout the entire session.

Abs were also trained occasionally, but were only a small part of the workout.

His trainer also mentioned that Zac didn't just need to look like a lifeguard, he needed to perform like one.

To achieve this, Murphy included a few exercises from his arsenal to increase Zac's agility, explosiveness, and speed.

Let's see just how intense his training split was.

We finally reached the best part of the article, so let's get to it.

Let's me start out by saying that Zac's diet and training -in preparation for Baywatch- was very intense.

Zero-carb days, super-set workouts, and three-day splits can definitely take a huge toll on the body.

With that being said, it's nothing out of the ordinary for those that practice a bodybuilding lifestyle.

Although Zac worked his butt off, I don't believe that his training sessions or diet were crazy enough to stimulate the jaw-dropping transformation that he underwent.

To make matters even more interesting, it's important to note that he got ready for his role in three months; that's only twelve weeks, give or take. 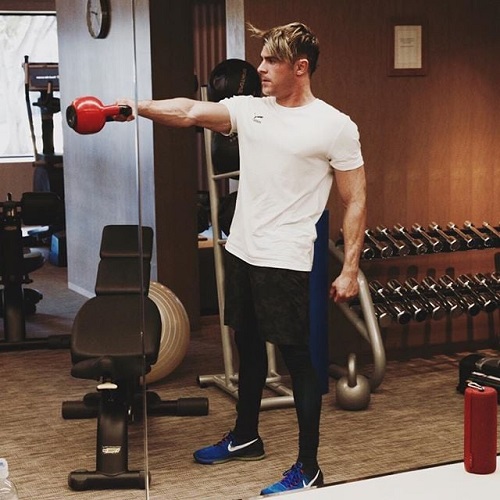 That's why I'm inclined to believe that his transformation wasn't achieved naturally.

I'm sure that a lot of people will question my judgement and say that it's possible for the human body to change very quickly.

Although I agree, the human body doesn't change that much in such a short amount of time… at least, not naturally.

First and foremost, Zac has always been in good shape.

Genetically, the High School Musical star has always been lean and rocked an impressive six pack. 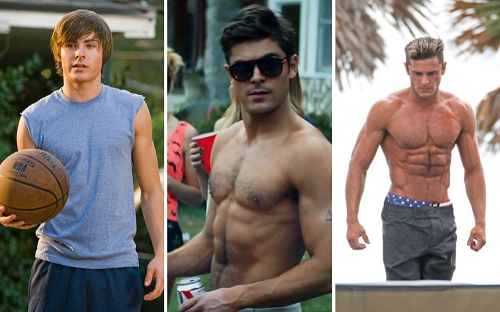 With that being said, the physique that got the media talking looked nothing like the one we've seen in the past.

The Baywatch physique that Zac displayed was a lot bigger, leaner, harder, and more vascular than anyone had ever seen.

No one -no matter the genetics- has the ability to create a physique like that in such a small amount of time.

While he might be natural at the moment, it's possible that he relied on anabolic steroids to get ready for his role.

Normally, to achieve a physique like the one he had in Baywatch, a bodybuilder would use a series of steroids that would help him build muscle, lose fat, and increase performance.

Some of the most popular compounds that would be used are Anavar, Halotestin, Primobolan, Trenbolone, and Winstrol. 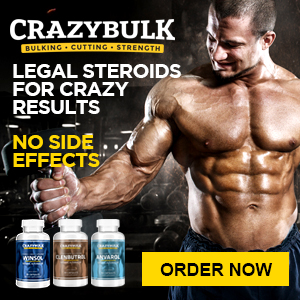 Ultimately, whether Zac transformed his physique naturally or not, his Baywatch physique is one of the most impressive to have ever grace the big screen.

His muscularity, leanness, and hardness were absolutely insane.